Precisely what I’d worked to prevent from happening, happened.

And as it happens, it couldn’t have happened any better.

Sutherland Weston worked with Mary Hartt to craft the “Real Mainers” radio and television campaign for Dysart’s Restaurant and Truck Stop in 2012. The campaign featured true customers sharing what they love on Dysart’s menu, and each commercial ending with Dysart’s simple, and very “reminiscent of home” call to action: come eat!

I’d consumed more than a few chicken pot pies from Dysart’s (I have the phone numbers for both Dysart’s locations stored on my phone) so describing the dish wasn’t a challenge.

“Pulled chicken,” “fork tender veggies,” and “mmm-good gravy.” I perhaps risked false claims of plagiarism from Campbell Soup’s “mmm mmm good,” but I sought a description for the gravy.

And the crust? It is “buttery.” And “flaky,” even as I challenged the auto-correct assertion that the word is not spelled f-l-a-k-e-y. Therefore, “baked in a buttery, flaky crust” helped finish the script on October 1st, 2012. 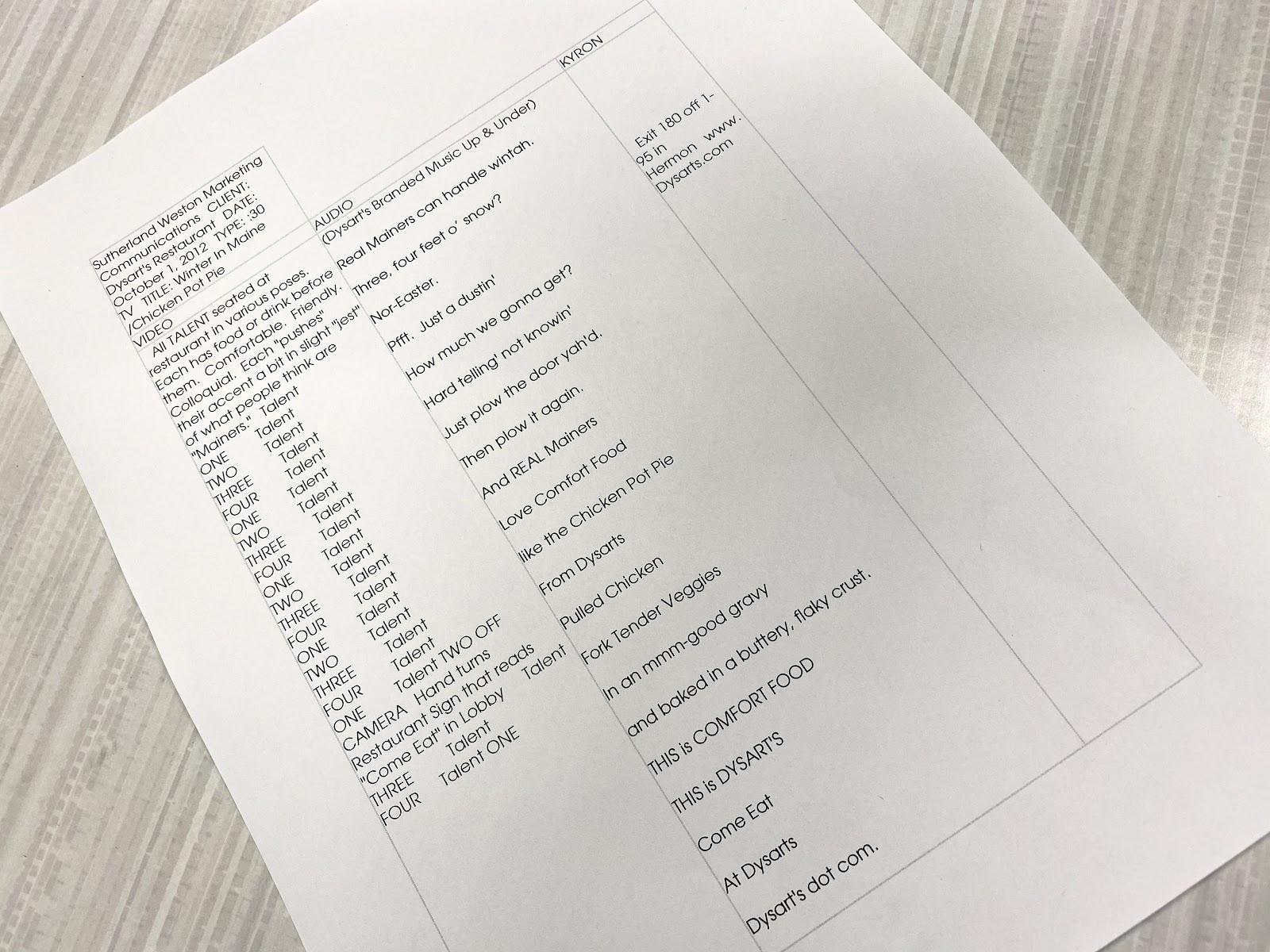 The cast was set to include a very good friend Paul Tormey of Orrington (representing “dad” and his then John Bapst High School-attending “son” Michael.

And to represent Maine’s senior citizens, Sonya and Jack Palmer.

Based on previous filmings, I made a note that, when assigning “who’d say what lines,” I should give Jack the easier ones.

I lost that note. Somewhere.

You’ll note that Elizabeth, the Sutherland of Sutherland Weston and my wife, had plans to meet Tanya at the gym that afternoon.

My colleague Adam and I arrived at 2:00 pm to scout and set up. Sonya and Jack arrived early, took their seats, and we began filming at 2:49 pm.

The fault was mine. I’d lost my “don’t give Jack the ‘buttery, flaky’ line note.

Precisely what I’d worked to prevent from happening, happened.

Paul and Michael, Bre, and Jordan and Emily were truly enjoying the moment patiently waiting for their scenes. I recall phoning Elizabeth and apologizing that she might have to skip the gym to pick up sons from school because we were running late.

What’s not widely known is that Sonya did say “baked in a buttery flaky crust” in her first attempt, but, perhaps tired from coaching Jack, she didn’t smile. We needed a second take. That’s when she flubbed her line and howling laughter filled the restaurant.

The final version of what we’d scripted for a commercial:

was eclipsed by what Sutherland Weston reworked for television and social media.

Jack & Sonya’s bloopers has more than 7.5 million views on YouTube.